Why Perfectionists don’t always have it all right. 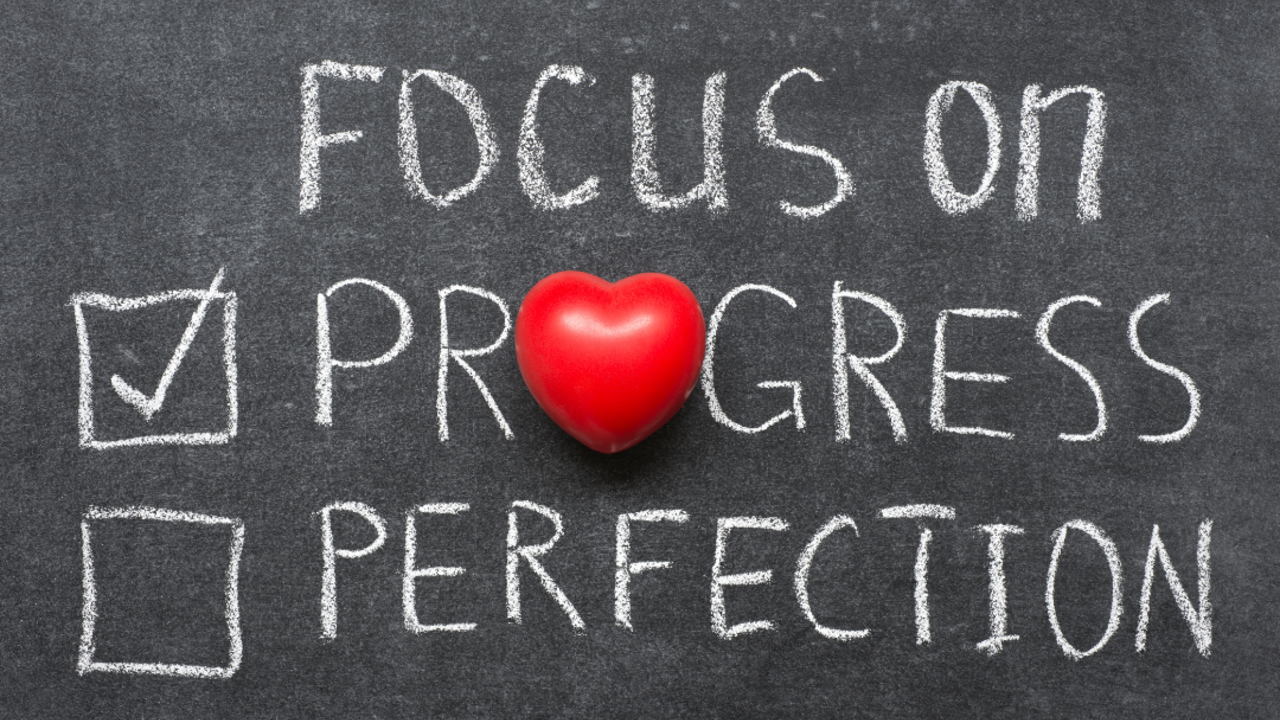 I signed up for the Joe Wicks 90 Day Plan a month ago. My personal plan was sent to me, I got it printed, chose the recipes that I liked (to be honest, it’s a whole new taste sensation for me!) and I joined the Facebook Group. I read about lots of people’s achievements and was inspired. Not enough to actually get on with it though…

The reason for this? It’s not because I am lazy. I’m not fearing the workouts, I did enough in Lockdown to know what I’m letting myself in for. Nope. It’s the cooking. I don’t cook and I don’t like cooking and to be honest, I don’t know where to start. I know we are given the recipes but I want to do this whole thing right and if I  get the recipes wrong and consequently, don’t like what I have produced, then I’ll have to cook a makeshift meal that will be off-plan. I will have messed up my macronutrients (again, something new I’ve learnt about) and the whole thing will be ruined.

Do you see what I have been doing? Writing myself a whole narrative of how this is going to pan out from the get-go. And I haven’t even started yet…

This is due to the fact I like to do things right – I’m an ‘all in’ kinda person. I need my ducks in a row before I will do anything. The t’s need to be crossed and the i’s dotted. And so the 90-Day Plan in all it’s glory sits on ‘the side’, face down (so I don’t see Joe’s smiling face every time I walk past) and I think about the workouts I could be doing and fret about the cooking I should be doing. I am procrastinating and that is one trap a Perfectionist falls into…

It’s got to be perfect

My perfectionist tendencies show themselves in all kinds of ways. I seemed (notice – past tense because I am working on this!) to have a mantra of ‘do something well or don’t bother’. I am the one who wields the red pen at work – the proofreader of all documents. It was the same when I was a school governor. I was always the one who would return policies back to the Head with Track Changes all over the document – usually grammatical and punctuation errors, with the odd questions on detailed points of the policy for discussion. I could not overlook the errors; it went against the grain.

When I moved to the crunchyside, my perfectionist trait did get quite ridiculous. My husband was commuting to the Big Smoke so wasn’t at home much; with a 4 and a 2-year-old, plus a newborn, life was a tad hectic.  However, I was determined that I was going to be in control, or at least give the impression that I was. Fake it til you make it eh? Every day when I took the eldest to Pre-school, we’d all be dressed by 8.45am, I had a smidge of make-up on (mainly concealer to hide the dark bags!) – a bit of lippy so I looked merry and bright, and my baby was always, always, out of her sleepsuit and dressed for the day. Even though we only lived a five-minute walk to the Pre-school, we all had to be ready for the day ahead. There’d be no slouching there in onesies (I don’t actually own one), we needed to look like the von Trapp family, minus the lederhosen!

The house would always be tidy and clean. We did messy play, made fairy cakes (who am I kidding?! I couldn’t stand baking back then so crispy cakes was my lot!), played games, role-played with toys (although I was hopeless at this. My children would look at me wondering how I could be so so bad!), we went for walks in the woods finding bugs and other insects and came back with muddy wellies; but, I could whiz round and tidy up in a matter of minutes. Then one day a neighbour who was a Health Visitor, commented on my tidy house. I said: ‘tidy house, tidy mind’ and she said: ‘You’re the ones we were always worried about.’ No qualification of that statement, just a strange look on her face. And I was so upset. I felt affronted, that my entire skills as a mother had been brought into question. Or was she questioning my sanity? Or maybe that I had anxiety or OCD? Or was she bringing my ability to be a good mother into question? Was she insinuating that I was too worried about having a perfect home to bother playing with my children? I felt all my perfectionist tendencies being called into question right there and then and I won’t lie to you, it had quite an impact and I stopped trying to get everything right, and to look like I was in control of everything because clearly, I was not giving off the vibe I intended!

Something in the way

The Perfectionist has very high standards and tends to have an all or nothing approach to life – do it well or don’t bother to do it at all! If a job is worth doing, it's worth doing properly... I mean perfectly! They strive for flawlessness and set excessively high standards, are self-critical and are concerned about what others think about their efforts.

What drives a Perfectionist? Where do these ideals stem from? Who set these perimeters for them? We are all born with certain propensities but at a certain point, they are enhanced by socialisation and before we know it, we have a set of characteristics that we are perpetuating and they become an habitual part of our personality.

Maybe a Perfectionist wants to feel that they have control over their life because maybe there are aspects over which they feel they have no control – perhaps their relationship with their partner isn’t going so well and despite their best efforts, they feel it’s falling apart so they throw themselves into work, to prove to themselves it’s OK because they’ve got this bit covered.

I’m not entirely sure where my need to be a Perfectionist stems from but I know I never felt good enough at High School and my confidence was knocked. I wasn’t as clever as the crème de la crème and the teachers seemed to focus their efforts solely on them so I was always trying to prove myself.

I think there’s a common misconception about Perfectionists. People think they’ve got their sh*t together when in reality, it’s exhausting maintaining this high level of togetherness. It’s not necessarily to ensure they look good for others, sure, there’s an element of that, but essentially, they’re doing it to prove to themselves they can do this, that they can spin these plates and keep all the balls in the air. In reality though, they’re like a swan, supremely calm to us all but underneath, they’re paddling like fury.

In her TED Talk, Charly Haversat calls herself ‘ a reformed Perfectionist’ and advocates the ‘good enough’ mentality because as Voltaire said: “Perfect is the enemy of good.” She also talks about the Nirvana Fallacy which is the idea that a “perfect solution” exists and that you should keep searching for it before taking action. Except the action never happens because you’re stuck in a loop seeking the perfection. Haversat urges parents to raise their children to not strive for perfection because it is an unrealistic expectation. Instead, that it's important for children to learn that not doing everything perfect is OK; moving forward with imperfect action helps us to learn as we do.

Imperfect action that’s the key; getting on with something and moving forward, despite knowing you might not get it right first time but that you’ll pick it up and learn along the way.

How to intercept the loop

Don’t get me wrong, Perfectionists are high achievers but at what cost? They are meticulous, set high standards for themselves (and consequently, for others too!) and therefore, there is no room for mistakes. Not to mention that success is never enough because they believe there is always a way to improve and to be better. Exhausting! Burn-out is very often on the cards.

The million-dollar question is how does a Perfectionist reframe their thinking to thought patterns that will serve them well and help them to adopt a mindset more akin to the ‘good enough’ mentality?

Now, I am not advocating dropping one’s standards but it’s about addressing the habitual thoughts you are having. How can you dial down the power you give to these thoughts? It’s great to want things to look right and to be right but what can you do to dilute it, to limit the more negative side of these traits, to be more forgiving of yourself?

A mindset where you allow imperfect action is a positive move and it helps to get you out of the rut you sometimes create for yourself – a bit like a car tyre stuck in the mud with the wheel just spinning and the car not moving anywhere. If you don’t set such high standards for yourself, you are creating a much calmer mindset. It also means you don’t place such high expectations on others, because if you have them for yourself, you’re sure as heck likely to have them for others and it can be exhausting for all concerned!

If you are a Perfectionist, own those thoughts around the need for absolute perfection being required in all endeavours, be aware of thoughts that you’ve failed if everything isn’t 100% on point. Challenge these habitual thoughts and ask yourself, as Dr Phil would say: ‘How’s that working out for you?’

Start by taking low-risk imperfect action and see how it feels. Get comfortable with delegating, make a conscious effort to be less hard on yourself or even, ask for help. One assumptive affirmation you could repeat to yourself daily is: I am good enough.

Give yourself permission today to begin freeing yourself from this ‘label’ of perfectionism and develop new thoughts that will serve you better. Today is a new day. Today you can reinvent yourself.

Take this quiz to discover which personality trait you’re currently leaning more towards, and learn a simple 3-step strategy you can begin implementing today to start bridging the gap between where you are now, to where you want to be!