Why it's an easy game from the touchline 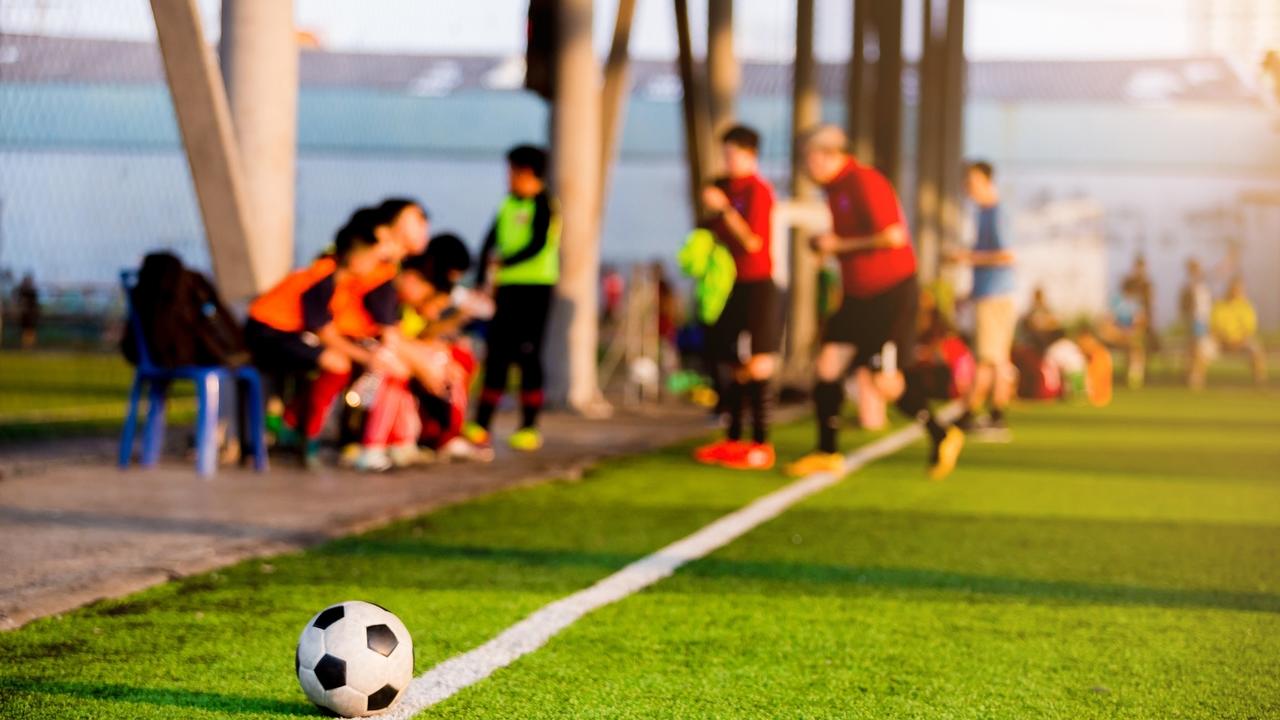 Who wants to be on my team?
My brother-in-law Jon manages and coaches a football team with 8 to 9-year olds. He’s done this for almost three years and it’s got to the point where he’s just about had enough. It’s not the kids driving him nuts. Well, yes, they can be boisterous, over-excited and not listen to a word he says but that’s what it’s about for him – the kids having fun, learning a skill, teamwork and running off a bit of steam.

Initially, Jon started the team because there wasn’t one in the area for his youngest son’s age and gradually, more and more children have joined the team, which is a great thing. What isn’t so great is the lack of support from fellow parents. Jon runs the team and that means doing all the admin, planning the logistics, as well as taking the training sessions and being present at all the games. He’s repeatedly asked parents if someone will assist but no one ever comes forward.

I think the final straw came during the summer holidays. Jon thought he’d run a few extra sessions during the week – he had some days off to look after his boys so thought why not, let’s get a few more involved and have some fun footie sessions. Most of the children from his usual football team arrived because for a lot of the parents, it was viewed as free childcare – Brucie bonus! Towards the end of each session, Jon noticed quite a few of the Dads turn up, tinnies in hand and sitting down to have a good old natter in the sunshine. At the end of the session, no one offered to help Jon clear the equipment away, nor even offer him a drink – perhaps by way of a thank you for keeping their child amused so they didn’t have to. Nope, they just took their children home, sometimes without even a thanks. ‘Charming’ was Jon’s thought.

With a heavy heart, Jon sent the email he probably should have sent two years ago, saying to parents that unless some come forward to help with a parent rota, the football team would have to fold. Guess how many volunteered their help? One. That’s not a rota to me… Jon’s going to give it until half-term and if no one else comes forward, he’ll stay true to his word and there will no longer be a team.

The why
Jon is full of frustration about the situation but his values and emotions have played such a major part in the reason why so far, he hasn’t quit running the team. Jon’s Dad sadly passed away three years ago and he too started a team when Jon was young, so Jon feels running the football team is part of his legacy. Closing it would be tantamount to dishonouring his Dad’s precious memory. Jon believes in giving back too and wants his boys, as well as those they know, to have the opportunities he had. However, the flipside is that night after night, he sits on his laptop sending emails to parents about the weekend game logistics, plus doing all the admin that’s involved with running a football team. A lot of parents probably think it’s a case of sending one email with the venue and timings and Bob’s your uncle, there’s nothing else to it. If only. So, with work and the team, Jon doesn’t have a lot of spare time to spend with his own family. It’s all got a bit skewed…

People are people so why should it be…
The trouble is, people will behave like, well, people and you’re never going to change them. All kinds of personalities and characteristics are what run through the very fabric of humanity and it’s never going to be the case that we all agree with each other, let alone like each other. When it comes to running groups, organising an event or spearheading a project, there will always be the doers – the ones who always stick their head above the parapet and offer to help because it’s almost second-nature to them - it’s a high-ranking value for them and maybe it’s because they have the extra drive within them; there are those who will assist the organisers but don’t really want to do too much more than that, for whatever reason – other commitments, self-limiting beliefs or perhaps they don’t like responsibility. Then there are the bystanders, happy to watch as others organise, to enjoy the benefits of what is organised but who have no intention of getting involved in the organising because they don’t have the time, maybe don’t want to make the time, or perhaps just can’t be bothered and don’t place value in said activity or event. And all those people are choosing to do what fits most comfortably with their emotions – their values. Sometimes there seems to be no rhyme or reason but that’s because we’re not them.

In Larry C. Rosen’s TEDx Talk The Secret to Understanding Humans, he talks about why we do what we do and says there are 30 basic human motivations which will help us to understand the behaviour of others. If he has the key, maybe we should all be using them to help us to understand others!

There lies the kicker
If you find other people’s actions - or inaction - frustrating, that’s your fault, not theirs. We all have different values and therefore motivations for what we do or don’t do, so are not all going to behave the same. When we find ourselves feeling frustrated or disappointed by another person’s actions, is it not the case that it’s because they have fallen short of our expectations – our own values? Who is responsible for our expectations? We are! So, it’s nobody’s fault but our own as to why we feel these emotions. It’s a bitter pill to swallow.

The thing is, we might never know people’s motivations - or lack of, and therefore the reason for the level of their involvement. There could be numerous reasons yet we make assumptions.

Two of my daughters have been in Beavers, Cubs and Scouts and there were always calls for volunteers. I was one of those who didn’t volunteer but it was more a case of couldn’t as opposed to wouldn’t. My husband for many years commuted and therefore got home late. My youngest was too little to come with me to the sessions and stay up late so I felt guilty I wasn’t ever able to volunteer. Eventually, understandably, each of the Beavers, Cubs and Scout groups folded because not enough people stepped up to the plate for a parent rota.

My brother-in-law may feel frustrated that people aren’t volunteering but he might not know the reasons why help isn’t forthcoming. There could be people in a similar situation to mine – they’ve younger children who they can’t bring along with them and they’ve no one they can leave them with; maybe whilst their child is at football practice, they’re taking another one of their children to another activity; perhaps they are a single parent and that two hours a week when their child is at football practice, that’s the only headspace they get and so for their well-being, they choose some R&R over volunteering. Jon might say though, that giving up one week in four to help him, will mean the club is saved and if not, they’ll lose that precious R&R all together if the footie sessions stop. Some people don’t or can’t join the dots though…

Do you have walkaway power?
You see this in the workplace – those who readily volunteer themselves to run a project, take on extra work, be a mentor. Cynically, it could be seen so they can get ahead for their own progression and do you know what, good for them. Maybe it’s because they are one of life’s doers. Or is it that they allow themselves to be ‘put upon’? If it’s not HR, there’s always that one person who is the organiser of Birthday and leaving gifts. Jan in Accounts did it once or twice and then it was assumed she liked doing it. Does she though or is it that no one else can be bothered and until Jan says otherwise, everyone will expect her to be the one who organises it all. Maybe Jan enjoys the fact others look to her to organise these things, she feels it’s her responsibility but it’s when you feel there’s the assumption, as opposed to the respect, that’s when you need to love yourself more and say no.

If you are one of life’s doers, it’s important to take on these things consciously as opposed to accepting with a knee-jerk reaction – as we say on The Winning Edge – to MUMMS it – Make Up My Mind Slowly. Make an informed decision rather than say yes straight away. And have the self-respect and walkaway power to say no if it isn’t serving you well. A phrase I always find helpful when asked to do something I don’t feel comfortable doing is: ‘It isn’t against you, it’s for me,’ even if I say it in my head in order that my response communicates that ethos, as opposed to me saying no and perhaps coming across as unhelpful.

Be in the moment and enjoy what you do
Whether Jon decides to close the team or not, what’s important is that he takes pride in the fact that his values mean he has run the team for three years with no help. Feeling resentful will not help the situation. Too many people do something day in day out and feel resentful to others that they’re doing it, without ever considering that this is all their choice. I know we don’t always like what we choose to do but if that’s the case, feel pride in yourself that that’s your value. Don’t resent the team you work with because you’re always the one who takes the minutes at the weekly meetings, don’t resent them because you organise the Christmas ‘do’, love thy elderly neighbour for whom you always put their bin out and bring it in, feel the family bond for those you spend every Christmas with. Or don’t do it because you always have the choice.

Be proud that you’re the kind of person who organises and rallies round to ensure the job gets done. Do not resent those who don’t behave like you – they are not wrong and you are not in the right – that’s what they do and you do what you do, all because of our individually held values.

Managing our expectations of others is key. We cannot expect everyone to act like us – we all have our own individually held Mental Maps made up of our experiences, beliefs, values and expectations, plus, we all have different things going on in our lives – some which we might freely talk about and other issues we choose to keep quiet. Ensure you manage your expectations of others because otherwise, you’re just continuously banging your head against that proverbial brick wall…

As a footnote to last week’s Mindset Maintenance when I talked about my friend ‘Tom’ who had been bemoaning his work situation for about a decade but was doing nothing constructive about it, well, he sent me a message on Monday to say he’d handed in his resignation. When the floor goes, very often the ceiling goes too. The world is his oyster! Exciting times lay ahead for him and Kate.